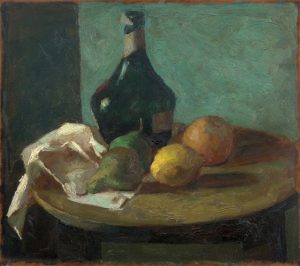 The simply ordered composition with the pronounced form of the bottle is very close to Still Life with Bottle, Glass and Loaf, a painting in the National Gallery, London, once attributed to Jean-Siméon Chardin (NG 1258). A reproduction of this picture was tacked to Scott’s studio wall around 1947 but it may have been an image he had always liked to have close to hand. The source of the reproduction has not been identified. According to Humphrey Wine, (curator of 17th and 18th Century French Painting at the National Gallery) the work was reproduced in Georges Wildenstein, Chardin, Paris, 1933. The attribution was subsequently dismissed by various scholars and the painting is now thought to be by a nineteenth-century imitator.

Painted while Scott was a student at the Royal Academy Schools, a label and inscriptions on the verso indicate that it was sold to Ivor Roberts Jones, a fellow RA student, for £7.50.