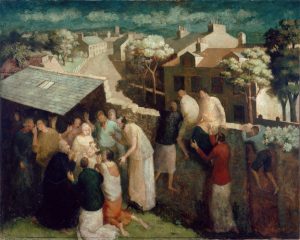 Scott completed this painting in 1935 while he was still a student at the Royal Academy Schools. It had occupied him for most of the summer. According to his wife Mary, he entered it for the RA’s Gold Medal prize with every hope that he might win. She remembered that even though Walter Russell, the Keeper of the Royal Academy Schools, liked the painting, the prize went to another student (John Kingsley Cook). Nonetheless, it was through Russell’s influence that the following year the painting was hung in the RA’s annual Summer Exhibition. By this date Scott had left London for Cornwall leaving Mary to get it ready to send in. With the help of Hilda Spencer-Watson she gave it a ‘very special matt varnish’, the one used by Hilda’s husband, George Spencer-Watson RA, who had befriended the artist. There had also been help of another kind. Scott told his friend Mervyn Levy many years later that a few of the shingles on the roof had been filled in by the poet Dylan Thomas.

The village setting for a religious subject in contemporary dress suggests a familiarity with the work of Stanley Spencer, and it is surely relevant that in 1935 Mary Lucas gave Scott a book on Spencer as a Christmas present (R.H. Wilenski, Stanley Spencer, Ernest Benn, London, 1924). Spencer was also one of the painters Scott remembered liking when, as a student, he visited the Belfast Municipal Museum and Art Gallery where he would have seen The Betrayal, 1922–3, which the museum had acquired in 1929.