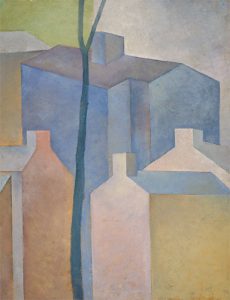 The painting belonged to the Belfast silversmith James Warwick who acquired it in an exchange of works between the two artists. Warwick and Scott had been students together at the Belfast School of Art and, as Scott recalled in a talk he gave to the Ulster Museum in March 1974, they had entered the school on the same day. Scott added the date of 1932 later; if correct, the painting was completed during his first year as a student in the Sculpture School at the Royal Academy of Arts. However, this does not necessarily mean it was done in London. Scott returned to Northern Ireland in the summer of 1932 and it may have been painted there.

The simple block-like forms of the buildings and the pronounced outlines of the chimneys suggest a familiarity with the landscapes that Georges Braque painted at L’Estaque in 1908. The colour, on the other hand, with its soft pinks and greens, testifies to Scott’s early love of Corot.